I currently have three small micro computers that I am using for FreeBSD Servers at home. These where purchased for under A$300 each and come with 4-8GB of RAM and are powered from a 12V DC power source. They draw around 0.75A at idle and can go up to 1.2A at full CPU/SSD usage etc.

I quickly wipped up a Vero board based distribution board to do some intial testing and this has worked will. It's also led me to research lower voltage (and power), drop protection devices: http://forum.swmakers.org/viewtopic.php?f=12&t=2169.


I thought it would be handy to be able to automaticly turn them off and on again during a power failure, as well as monitor their power usage. In this Alpha prototype PCB, I hope to be able to monitor the power input and each of the 3 server outputs. I am trying a few new different technologies here, so I am expecting to need another PCB produced once I have debugged this one and tested it out.

Initially I was going to have a go at using a Op-Amp to buffer and amplify the voltage drop across the 0.1V resistor, but instead I will be trialling some INA199 and/or some INA193 specialised current sensors. It be monitored and controlled via a ESP32 and KiCAD say is will look something like this: 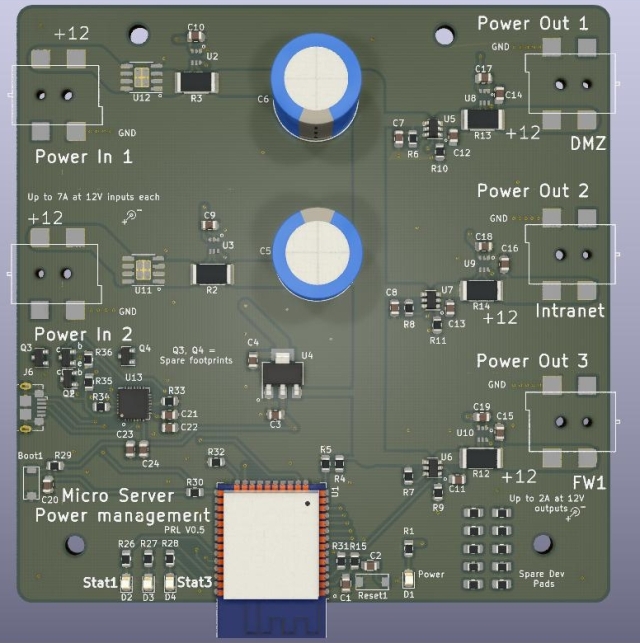