A couple of the SW Makers crowd have been talking about making an ultrasonic Bat Detector. I have played around with a couple of home made Electrit microphone circuits however they haven't works as they should and my 40+yr function generator has decided to stop working. Thinking it might be the electrolytic caps, but they and the power supply section are all ok.

I have decided to move onto a fully digital design, trying out the SPH0641LU4H ultrasonic MEMS PDM based microphone. Since I am on a bit of a ESP32 roll, I have created a 2 layer PCB based around the integration of them both. Actually, I have allowed for three ultrasonic microphones, so I can try different combinations of things. The PCB also has a BME280 which will give humidity, air pressure and temperature. No need to solder it on if we don't want to, or it could be added in later as required.

I have fitted a CP2102 USB UART, so the ESP32 can be programmed over USB. The board has a socket for an 128x64 OLED screen for data visualisation and debugging. While the ESP32 has two available i2S/SPI buses, my initial design wanted three: 1) PDM based Microphones; 2) audio out via a i2S based MAX98357 amplifier; 3) SPI micro-SD card. I scrapped the i2S audio out IC and instead am using the internal ESP32 DAC1 port to feed into a PAM8403 3W audio amplifier. I have manually created a small break-off PCB so I can test out the ultrasonic microphone on other dev boards later if I want too, ie: a Blue-Pill - STM32F103 board.

The initial PCB is just a beta version so I can test out the design and software. Here is the KiCAD front view of the PCB: 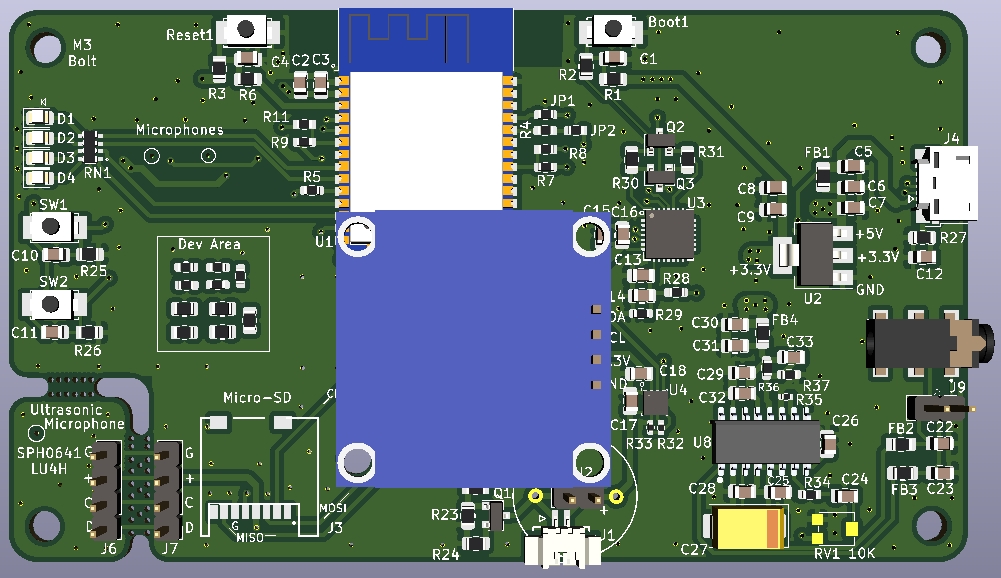 and the back side which has the three tiny microphone fitted to it and lots of debug/programming info: 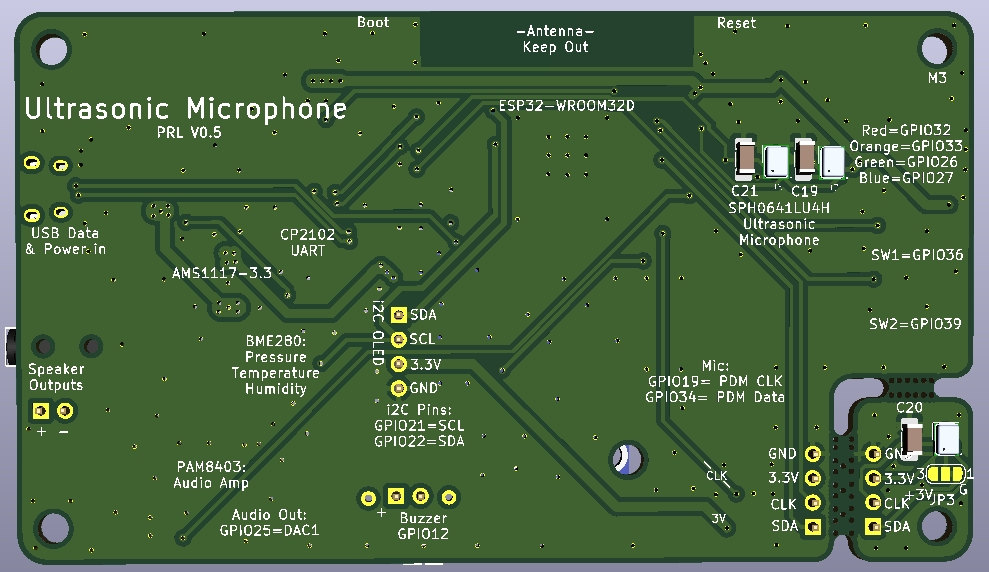 There is lots of spare space to later fit more features, or I should be able to shrink the PCB down, so I can two of them produced on a 10x10cm panel. I should have the PCB back on the week of the 14th of Dec. 2020, as the current production and shipping time is around three weeks for a standard PCB from JLCPCB.
http://www.bdug.org.au/
Top
Post Reply
1 post • Page 1 of 1