I have been fascinated by e-Paper since the technology was announced long time ago now. Back in 2017 a few of us did a group buy and purchased some black and white and a tri-coloured black/white and red e-Paper displays. These worked with the Waveshare ESP8266 and ESP32 universal e-Paper controllers, but I have always wanted to have a go at making my own controller. Mine is based on the Waveshare ESP32 universal controller, but I have added on a LM75 i2C temperature sensor and BME280 i2C temperature, humidity and air pressure sensor for the first prototype.

The aim is to develop a universal e-Paper controller, but also act as a name badge/room temperature sensor. The first version is larger than I wanted, but it has a number of handy test points and a Li-ion battery charger/booster circuit based on the TP5400 IC. It's also made on a 2 layer PCB. While I checked all the ESP32 pins I had chosen, at the last minute, I changed the two LED GPIO pins to use some closer GPIO pins. Unfortunately the ones I chose where input only, and I needed them to be output capable, so I have had to add in some bodge wires to some spare GPIO pins. Here is the board being tested with a 2.13" e-Paper display:

Lots of software to be written and tested, then the next version of the PCB will be designed up using a smaller 4 layer PCB layout.
http://www.bdug.org.au/
Top

The Adelaide Makerspace hosted a show and tell evening as part of the National Science week. I was luckily enough to be able to attend and display some of my PCB I have recently created. This included the current version of the e-Paper Name Badge project. I am on the road, so I have some time for software development. I now have the i2C bus IC's working well, and I have figured out how to display different fonts on the display:

Next up is to fix a couple of PCB errors, and change the PCB from 2 layer to a 4 layer PCB. This will allow the PCB to be designed up quite a bit smaller. The next version will include a MPU-6050 accelerometer, so the ESP32 will know which way is up, and adjust the text display appropriately.

In the current (first) version of the PCB, I included some test points around the e-Paper circuitry, so I could monitor how it works. I was surprised to see that each e-Paper uses different voltages. I have seen up to +-22 being used to setup the display!

This version included a CP2102 UART, to make it easier to program, however, I might move to a ESP32-C3, which includes a built in UART, therefore freeing up some space where I can place the accelerometer.
http://www.bdug.org.au/
Top

Today I upload the next PCB revision design to JLCPCB to manufacture. This will fix a couple of wiring issues and will include a MPU-6050 accelerometer, so the board will be able to rotate the text depending on which way your mounting the unit. I am also trialling a ESP32-C3 MCU. This is being billed as a ESP8266 replacement. It doesn't have many GPIO pins, but it comes with a built in USB UART, so I can now connect the USB data pins directly to the ESP32-C3 MCU. This helps lower the board BOM costs, and lowers the PCB real estate needed for the project. I have lots of spare PCB space, but I wanted to have a go at using the new MCU.

The ESP32-C3 isn't available from LCSC yet, it's too new, but I have purchased a Dev board and two version 2 modules from Aliexpress. While these are only a sample version, I believe the mass produced version 3 modules will be released very soon, and I can just hot air off the old V2 modules and insert the new V3 versions when they arrive. 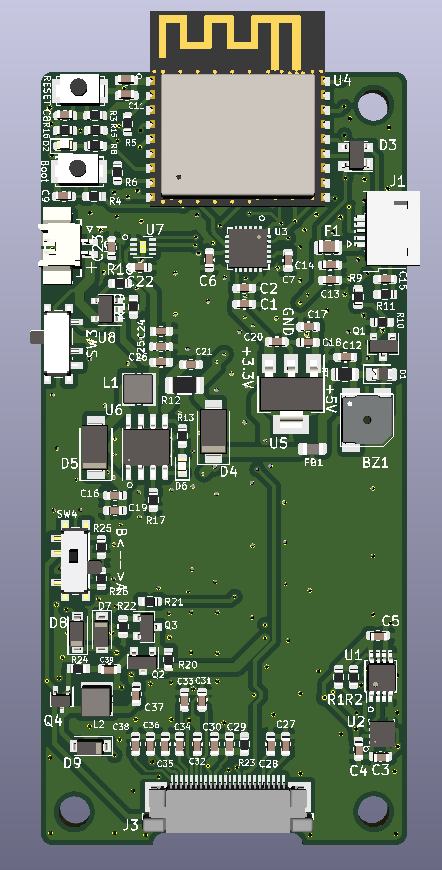 This PCB will be done in a Blue solder mask (but KiCAD is showing it above in Green).
http://www.bdug.org.au/
Top
Post Reply
3 posts • Page 1 of 1