Part 1
With a bit of time now on my side, I and a few others from the 2018 Hacker Trip Through China (HTTC), organised the 2019 Hackers Trip Through Asia (HTTA). It took us 6-8 weeks of part time organising, that capped off with a few weekly Wechat group calls to help finalise the trip itinerary.

The idea was to travel overland as much as possible and try and visit all the Maker spaces in Asia, as well as interesting University 'Maker spaces', and Art spaces that we found interesting. The adventure lasted seven weeks, with a further 3 weeks added on for a stay at Steamhead a Maker space in Shenzhen, China. Nine people made it onto the trip, and as per the HTTC format, people could come and go as they liked. The most we had was around 6 people at one time, but most of the time it was only 3-4 people.

The trip started at the FOSS Asia conference in Singapore, where I gave a talk on my 'Raspberry Pi based Insect Orchid Pollinator' project. After four days touring Singapore (lots to see in the Geek world), and giving another quick cut down talk (12min) on my project: https://www.youtube.com/watch?v=OqbkZUXpwTk at the Singapore Hackerspace: https://hackerspace.sg/. There are so many interesting Geeky places to visit in Singapore. There was even a huge Maker Space inside one of the public libraries at a community hub. It had a video and photography section, 3D printing, electronics etc.

We had met a person at FOSS Asia who wholesalers electronic kits, as well as makes printed T-Shirts, so where where fortunate enough to have a tour of his place and get the T-Shirt made up:

This kind of trip is only as good as the participants. We had a great crew, which saw us exploring Spaces and people during the day, and hacking on personal or group projects at night. We tried to stay in AirBnB's, which meant we could all live in the same space and work on our projects at the main table in the evenings. One of the things we thought of in Singapore was to create a T-Shirt. One member: Saad, thought up the slogan: I sync therefore I am. I had a vision of arrows along the top and bottom of the phrase, which was easy to put together using the free Inkscape design software: https://inkscape.org/

Spent a few days in Kuala Lumpa, visiting a few Maker spaces, the best one was located in the basement of a huge Shopping Mall. They where running a 'Repair day' event, so we got to watch and help out a bit.

We bused up and over to Penang and spent a few days exploring the wonderful local food and the Science Cluster, a huge Government sponsored Maker Space that even has its own wetlab: 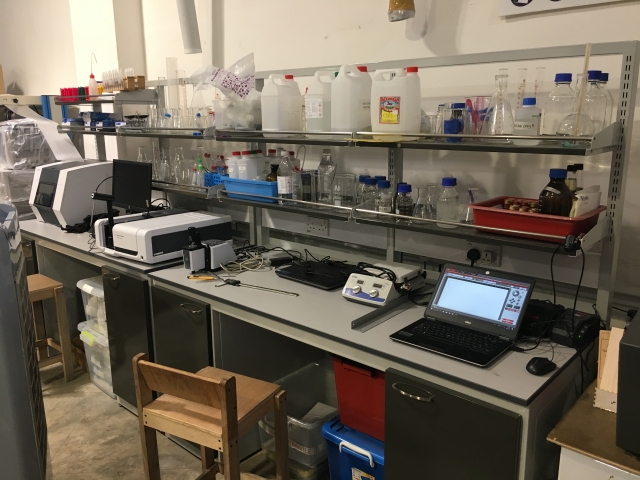 Due to time constraints, we flew to the bustling Bangkok. There was quiet a lot to see there, which kept us to a busy schedule. At least two big Maker Spaces, one (Pinspace) which hosted art/design, electronics, embroidery and sewing rooms. We where all getting fired up on working on some Arduino based projects, luckily, we found a place close by that sold Adafruit and Chinese boards. This allowed us to stock up for the rest of the trip. We did design up a HTTA 2019 Malaysian badge, just because none of us had tried this before:

At the end of the Bangkok visit, a lot of people left, and some new people joined in for an overnight sleeper train trip to Chiang Mai. We spent a wonderful week there. It was a bit of chilling out, as well as visiting the two Maker Spaces there. One was a very commercial place that was busy building and selling air particulate/quality meters, the other was more laid back place. A few of use hung out at the Caiang Mai Makers Club for a few days and attended a few workshops, one being: https://playground.cmmakerclub.com/2019 ... aker-club/

We finished up a bit early, so we could miss the Water Festival. It was also a parting of the ways for a while, as most people had to return to work for a stint.
http://www.bdug.org.au/
Top
Post Reply
1 post • Page 1 of 1

Return to “Off Topic”