by parkview
I have donated my iPad 1to my mother-in-law and the new ones don't come out for a months yet. I just happened to stumble across a 7" Pendo Pad in the Bunbury Office Works for $69! I presumed at that price it wasn't going to be the fastest tablet on the block, but boy it was cheep.

It turns out, yes, it's slow, the battery doesn't last very long and it does lock up every now and then (is that a crappy App or the Pendo?), but it does the job. I found a reasonable SSH client, Samba client and a few other Apps to help me run my gear. 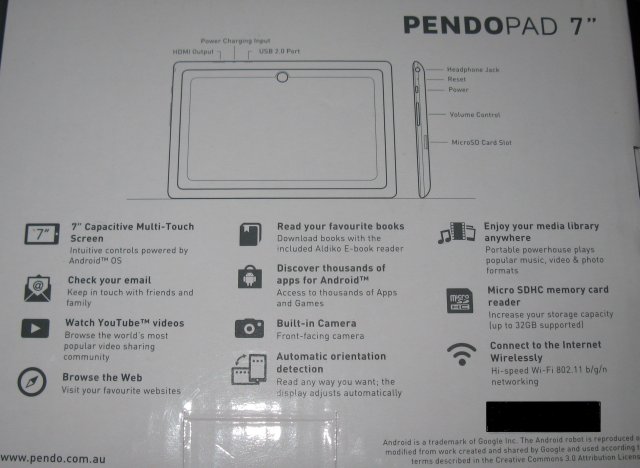 A reasonable purchase for $69 if your desperate or just need something to tide you over for a while.

by Jubbp
It's the old saying, you get what you pay for.

I have a DX extreeme tablet I purchased off the net for $89 and it is soooo slow.
Not a great advertisement for android.

I could;t tell you any of the details as it's setting on the US pile of equipment in the office. (I could't even use it as a book reader with the Kindle app)

Maybe one day I'll get back to it and maybe give it another life in one of my projects.

by parkview
I don't mind the speed so much, but the battery management sucks big time. It won't even charge beyond 66%! The battery only lasts around 1-2 hours of run time! Thats what hurts the most with it. I can live with the rest of the faults.

I did find a nice free Android SSH client: 'JuiceSSH'. It as all the right keys, including the arrow keys. Very handy for checking on remote RPi experiments.

by seaton
I bought a 2012 google nexus when they were going pretty cheap at JB, also got the price down with the sales dude although not as cheap as good ol DX. speed and battery is great and runs the multiwii and APM apps for my multicopter, perfect for out in the field.
All times are UTC+08:00
Page 1 of 1
Powered by phpBB® Forum Software © phpBB Limited
https://www.phpbb.com/