A place to review products you've used so other can gain from your experience.
Post Reply
2 posts • Page 1 of 1

Over the last few weeks Ive been playing around with Lightburn, https://lightburnsoftware.com), a 3rd party (commercial) software that works with the RUDIA controllers that come in most cheap chinese Laser cutters on eBay. along with the open source GRBL controllers. The costs for the Chinese controller is USD$80, and if you only want GRBL is half price at $40, however for the $80 it also includes GRBL, and you can upgrade your GRBL license at any time. Also for this price the license allows you to to install it on two devices, perfect for my wife and myself.

I wont go into demos of it as you an see from the you tube channel the tutorials - https://www.youtube.com/channel/UC-TdV9ThMD6E4MZztA6eZsQ

Straight out, one of the the things I love is that it works on Linux, Mac and Windows, the free software RDWORKS that comes with the laser cutters only work on windows and is VERY clunky to use in a Chinglish sort of way, if you've ever used it you'll know what I mean, dent get me wrong the software is very capable, just not intuitive.

As both myself and my wife are Mac people I was looking forward to something I didn't have to fire up a windows VM to use each and every time I want to use it.

After using it for a couple of weeks now I can safely say that I'll be sticking with it.

One of the cool features ( and there are a few) is that it has a camera interface for work positioning using computer vision. So I hooked up a spare webcam with some double sided tape to test things out. There is a calibration and alignment procedure and when completed you can throw away the red dot laser pointer that these laser come with, however this is not just for job alignment to the workpiece, it also allows to capture an image and then you can scale rotate and align to your workpiece.

I've attached a couple of photos the Danny and I were playing around with capturing his drawings.

The first capture was a Letter "D" for (Danny of course), then we captured his name which we rotated and resized to engrave inside the original letter D using the camera work alignment, then on the back we engraved a doodle he quickly did and resize and located on the workpiece 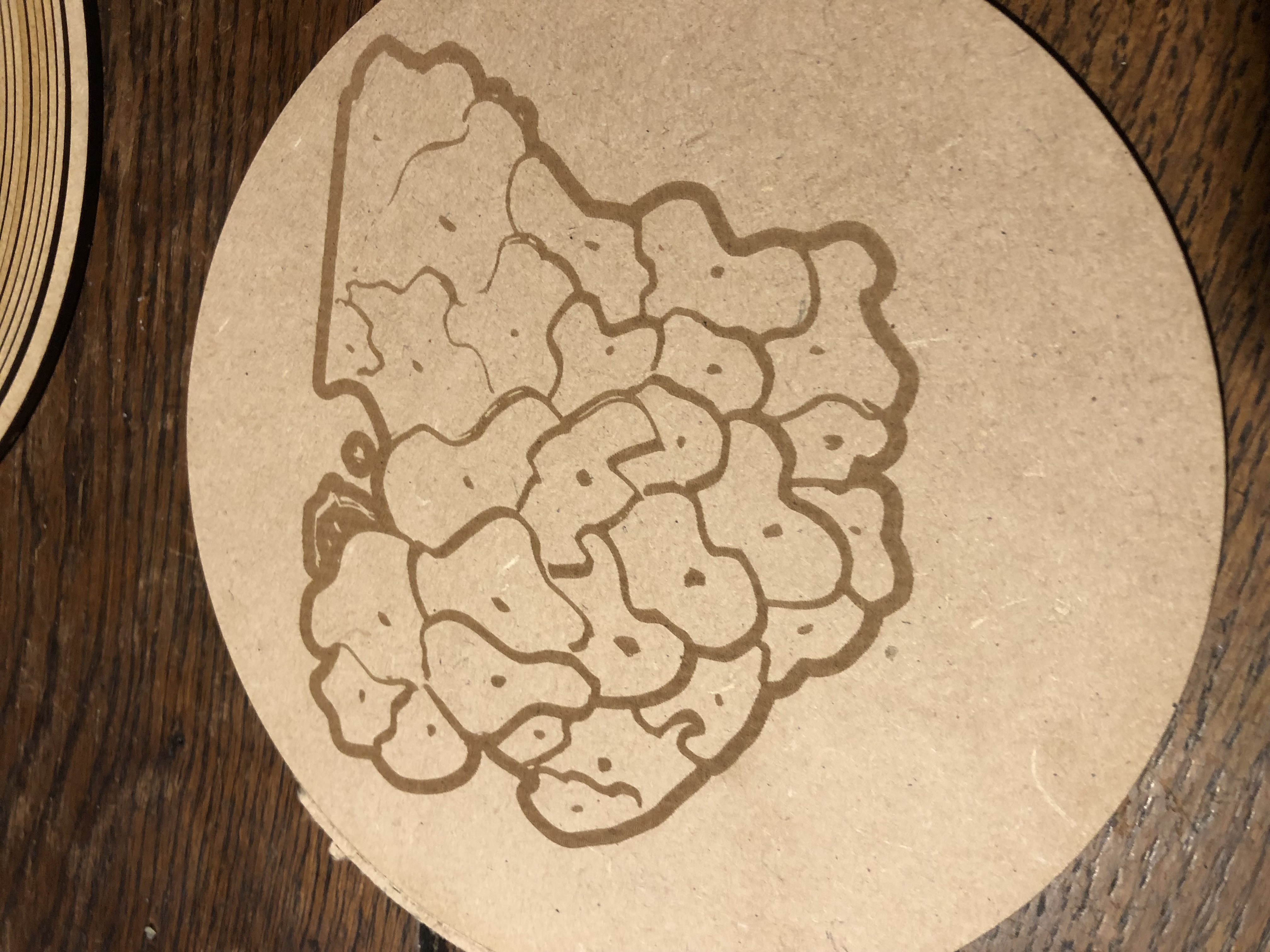 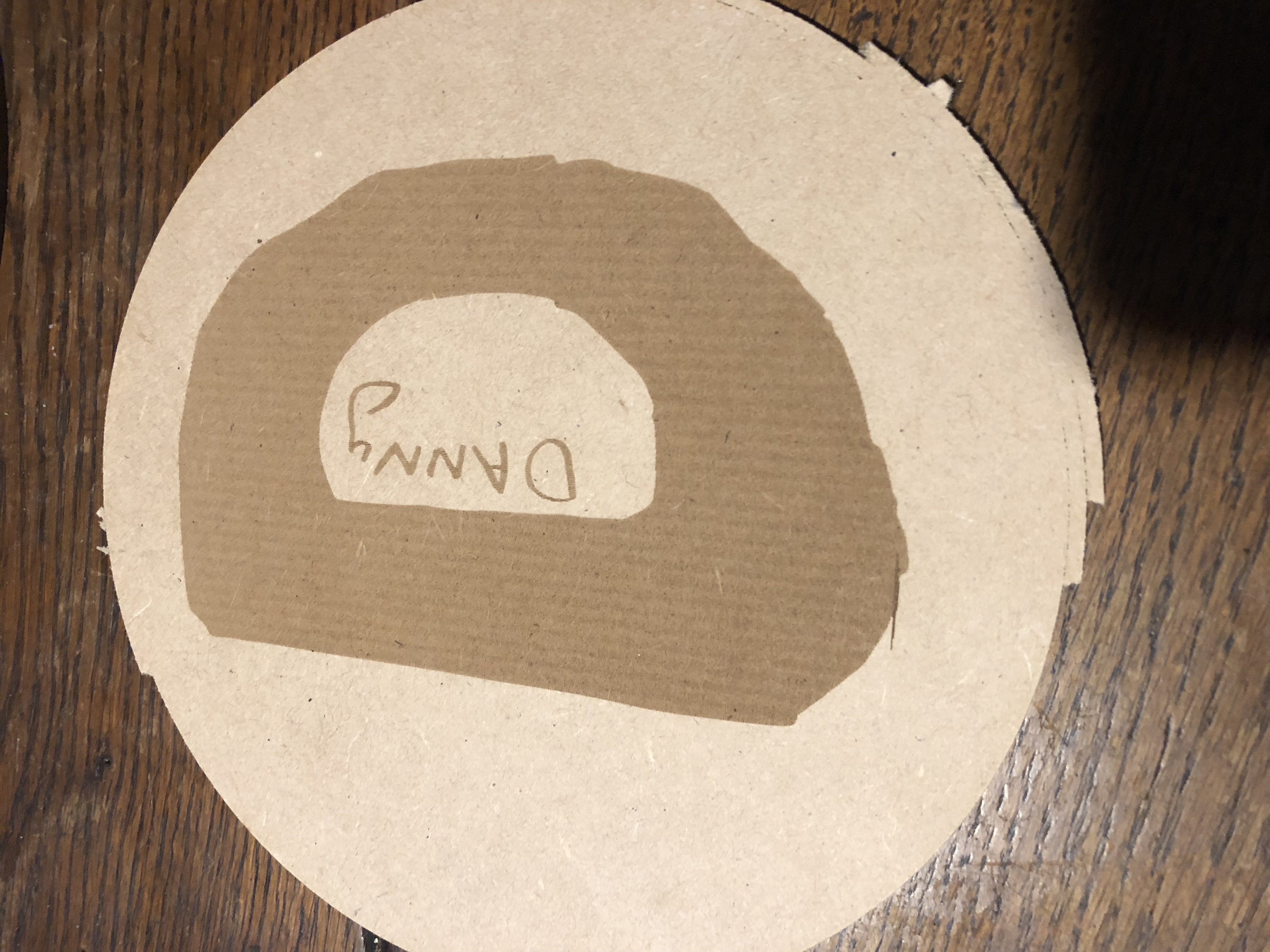 So to cut a long story short this software is fantastic, very intuitive and very easy to use. If you incorporate a camera for alignment and capture, its even better!

The one problem I've had and it appears is only related to the Mac is the underlying FTDI drivers are buggy. Its not a light burn issue but a Mac one, the result is that if you reconnect the mac to the device, i.e. you shut down the laser then reconnect after power up, the Mac doesn't see it and you have to reboot to restart the drivers. I haven't investigated further, however its not limited to the laser cutter from the little I did search on.

Thanks for the review Stephen. Yes, I concur about the software. I have been using it for all my recent jobs (after Stephen put me onto it), and found that it has some great and handy features.

Initially one complaint was that it seemed to import a DFX file as one complete blob, but last weekend I found out that the DFX file was coming in as a grouped collection of lines. All I had to do was select the DFX blob 'and then click on ungroup' to make it all independently editable/movable. Very cool.

Another cool feature, is that you can select a solid line and have the LightBurn software cut it as a dashed line. The dash parameters are under your control, so they can be as long or short as you like. In the example below, I drew up the design in DesignSpark Mechanical, and exported the project as a DFX file, and imported the DFX into LightBurn. I then click on each of the three line and set it to be a dashed line:

And since purchasing it, they have upgraded it three times in the last three months. Well worth the money!